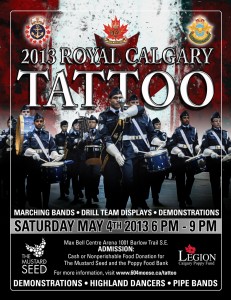 604 Royal Canadian Air Cadet Squadron is hosting a Musical Tattoo Saturday May 4 at 6:00pm at the Max Bell Arena.

This is a very exciting event, as there has not been a Musical Tattoo in Calgary for many years. The word Tattoo means the performing of music and displays by military bands, originating back to the 1600’s. One of the most well known Tattoo is the Edinburgh Tattoo in Scotland. We are wanting to bring this wonderful tradition to Calgary, There will be performances by the Calgary City Police Pipe Band, the 78th Fraser Highlanders Pipes and Drums, and their highland dancers , the Cochrane Pipe Band, along with marching show bands, the Alberta Rocky mountain Highland Dancers (which has 65 scottish dancers performing), the Al Hazar Shriner Air Corp, and also Air Cadet Squadrons from around the city and outlying areas putting on displays, along with a Black Powder Musket Shoot put on by the 78 Fraser Highlanders. There will also be static displays as well. This will be an exciting evening full of music, marching bands, and displays with over 500 performers.

The admission is FREE to the general public, with a cash donation to the Mustard Seed, or non perishable food items to the Veteran’s Food Bank.

We are hoping to have as many cadets and parents attend this exciting evening.

Parents, want to receive email communications from 781 Air Cadets?
Please send an email to 781aircadets+subscribe@googlegroups.com and follow the instruction afterwards.